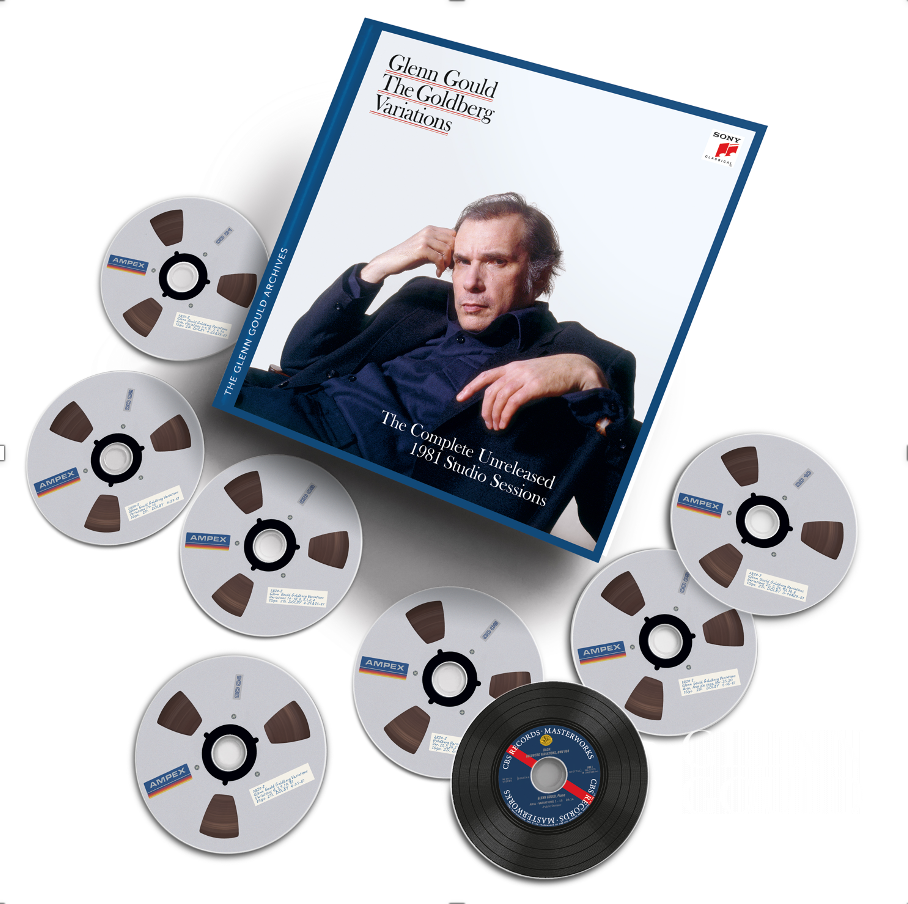 HARD-COVER BOOK WITH 10 CDS OF NEVER-BEFORE-HEARD AUDIO FROM
THE RECORDING SESSIONS PLUS THE DOUBLE GRAMMY-WINNING FINAL ALBUM.

In Gould’s 90th anniversary year and 40 years since the second album’s first release, Sony Classical is
proud to announce the release of Glenn Gould: The Goldberg Variations – The Complete Unreleased
1981 Recording Sessions, a uniquely detailed window into the creation of this classic recording.
Across 11 CDs, the set includes the double GRAMMY-winning final release as well as everything
committed to tape during the 1981 sessions, restored from the original ¼-inch analogue tapes and
mastered using 24 bit / 96 kHz technology. As well as the takes themselves, the session recordings
include Gould and the producers’ conversations, all of which are transcribed in a hard-cover coffee-
table book which also contains an annotated score.

EVENTS BY THE GLENN GOULD FOUNDATION

Gould’s home city of Toronto will also be honoring his impact with several activities throughout the month of September. In addition to an official proclamation from the city, The Glenn Gould Foundation will be awarding a standout individual in the arts on September 25, 2022. The Glenn Gould Prize, selected by a jury panel of Canadian music figureheads, will be presented on what would have been Gould’s 90th birthday.

More information on these celebratory events can be found HERE.

A day of film screenings, panels, musical performances, and discussions about Glenn Gould’s enduring legacy. Events are free of charge. Note: Free tickets should be reserved on Eventbrite.

Following the film, a panel discussion on the geopolitical importance of cultural diplomacy and soft power during times of global conflict.

World premiere of The Lord of Toronto, His Pavin, a work for cello and piano dedicated to Glenn Gould by Canadian composer, Daniel Hass, and Bach’s Sonata in G-minor for Cello and Keyboard, BWV 1029. Register here.

The Canadian premiere of Dear Glenn, developed by Yamaha Japan in consultation with The Glenn Gould Foundation. This deep-learning technology has analyzed the elements of Gould’s performing style and can produce a performance or any repertoire – delivered in the style of Glenn Gould (including music never performed by Gould in his lifetime). Register here.

Following Dear Glenn, a panel discussion on the implications of Artificial Intelligence for the future of music and human creativity. Are creative artists an endangered species?

Announcement of the 14th Glenn Gould Prize Laureate, followed by a celebratory concert. Events are free of charge.

Announcement of the winner of The Glenn Gould Prize by the 14th Prize Jury.

Note: Free tickets to each screening must be reserved in advance on the TIFF website.

Screening preceded by a brief piano performance by Rowan Sawarna-Small: J.S. Bach: Partita for Keyboard No. 1 in B-flat Major, BWV 825

Screening preceded by a brief piano performance by Rowan Sawarna-Small: J.S. Bach: Partita for Keyboard No. 1 in B-flat Major, BWV 825

Following the screening: Atom Egoyan and François Girard in conversation.